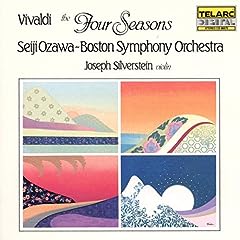 Contrary to popular culture/belief, there really was music before the iPod and iTunes.

Heck, there even was music before CDs, before cassettes, and – gasp! – before albums! (See, there used to be these things, called albums, and they were usually black vinyl, about 12 inches in diameter, with a little hole in the middle. There was a series of grooves – actually one loooooong spiral groove! – that went around the surfaces – there were two sides! – of the album. Those grooves are where the music hid! But I digress…)

I say all that to say that tonight’s Unwind is from a little bit earlier time frame than any of those folks. Tonight, I’m unwinding with Vivaldi’s The Four Seasons.

What a perfect way to unwind on what turned out – after a pretty blustery morning – to be a gorgeous spring day in northwest Georgia!